The increasing number of model simulations to be performed for international activities like the IPCC or the WMO ozone assessment present a burden for all modelling groups. In order to reduce the amount of extra model runs and activities, SOLARIS-HEPPA introduced two scenario simulations within the CCMI simulation request to a) address the uncertainty in solar forcing and b) investigate the role of solar forcing for the future with respect to a new grand minimum in solar activity.

a) Uncertainty in solar forcing

So far the standard NRLSSI data set (Lean et al., 2005) have been used for all model experiments within CCMVal and CMIP5. However, the spread of the atmospheric impact of different SSI data sets has been shown in a number of recent studies summarized in Ermolli et al. 2013). A larger UV forcing has consequences not only for atmospheric heating but also for ozone chemistry. In addition to the CCMI reference simulation C1, a CCMI scenario simulation (SEN-C1-SSI, 1960-2010) has been designed with the SATIRE SSI data set (Krivova et al., 2006).
In addition to this transient experiment a number of different and less computer time consuming time slice experiments with other SSI data sets will be proposed.

Fig 1: Differences for January between 2004 and 2007 averaged over the tropics from 25S to 25N for different atmospheric models using the NRLSSI data (solid lines) and the SORCE/SIM and SORCE/SOLSTICE data (dashed lines) for (a) the shortwave heating rate in Kelvin per day (Kday−1) and (b) the temperature in Kelvin (K).

b) Trend in Future Solar Cycle

Predictions of the solar cycle are extremely difficult and uncertain but it is known that the sun will get out of its grand maximum which peaked in the mid-20th century. There is a lot of research currently going on whether or not the sun will run into a new Maunder Minimum like period and whether and how this could may be counteract the recent global warming. To avoid speculations and put research on a firm ground a simulation with a future trend in the solar cycle amplitudes will be prescribed and the atmospheric response will be investigated within a proposed CCMI scenario simulation (SEN-C2-SolarTrend, 1960-2100). 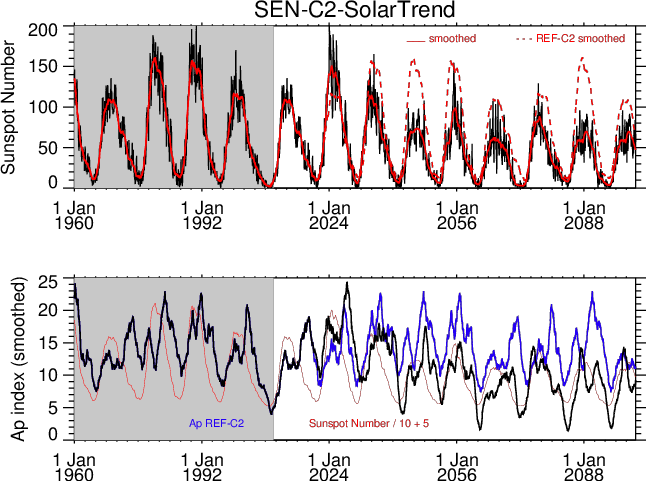