HEPPA-II exercise focuses on EPP indirect effects (i.e., polar winter NOx descent). This is motivated, on one hand, by the higher potential of EPP indirect effects to influence middle atmospheric composition on longer time scales compared to direct effects (i.e., SPEs) and, on the other hand, by its large variability related to dynamical modulations, making its representation in current atmospheric models challenging. In particular, the 2008/2009 NH polar winter resulted to be a very interesting period because of the peculiar dynamic conditions which were characterized by an unusually strong and persistent stratospheric sudden warming (SSW) that occurred in January, followed by the reformation of a strong upper stratospheric vortex and leading to very efficient descent during the following weeks. Similar situations were also found in the NH during January 2004 and 2006, however, the period November 2008 – May 2009 was better covered by satellite data than the previous winters.

Spatially resolved observational data during November 2008 – May 2009 are available from a large number of instruments (e.g., ACE-FTS; GOMOS, MIPAS, and SCIAMACHY on Envisat; MLS/Aura; SMR/Odin; SABER/TIMED), including NO and temperature up to the middle thermosphere, O3 and CO up to 100 km, as well as stratospheric and mesospheric distributions of NO2, HNO3, N2O5, N2O, and CH4. 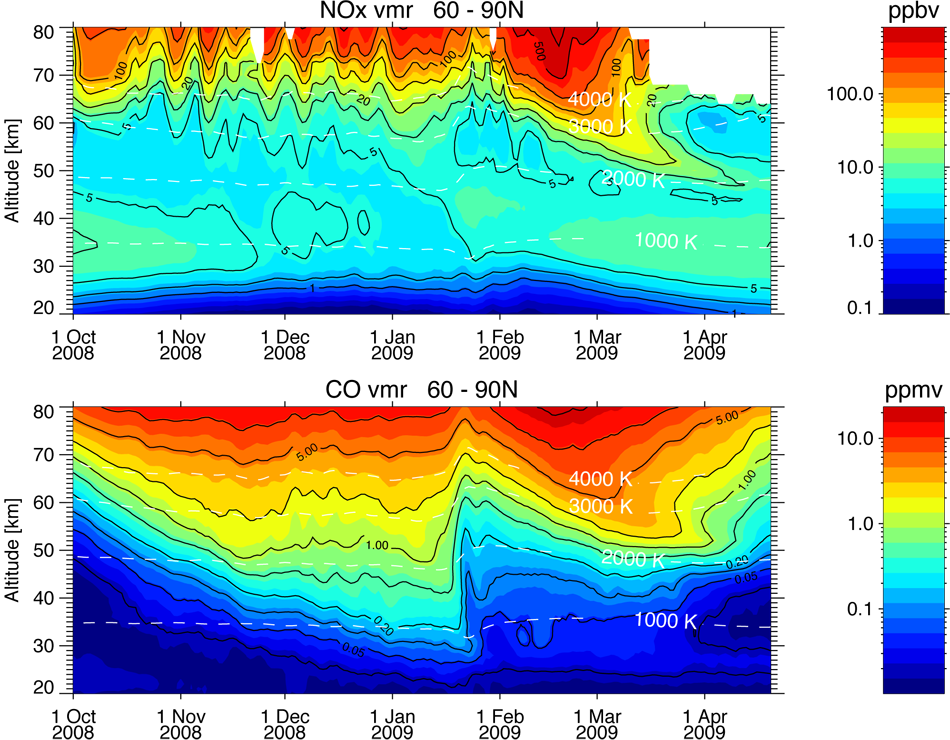 Figure 1: Temporal evolution of NOx (top) and CO (bottom) from MIPAS averaged over 60-90N. Until January 2009, the winter was characterized by homogeneous descent with minor perturbations. The major warming around 20 January led to CO and NOx depletion in the USM (40-70 km) related to the weakening of the vortex. Pronounced descent and entrainment of NOx occurred in Feb-March within an unusually strong re-established vortex.